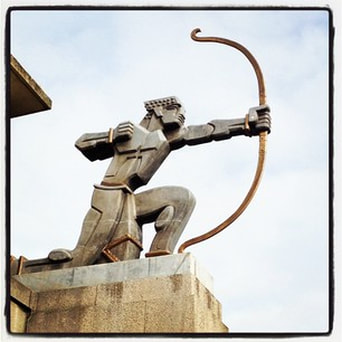 The purpose of this website is to document and celebrate the Modernist and Art Deco buildings of the Metro-Land area and era. I first started this project after moving to South Harrow in 2010. It began with me photographing some of the interesting local buildings, and grew as I found out more about both Modernist architecture and the concept of Metro-Land.

When I first published this site in February 2011 it featured 20 buildings, now there are over 300, from Richmond in the south-west to Enfield in the north-east of London. My explorations have taken me far from the area popularly thought of as Metro-Land, but in keeping with the famous idea that it is “a country with elastic borders that each visitor can draw for himself", I think all the buildings on this site share the progressive spirit of Modernist Metro-Land.

The buildings are grouped by geographically by borough. I have arranged the boroughs into North, West, East and South, as well as a section for buildings outside London. You can also  view the buildings by Architect and read more about those who designed them.

The website has been featured in a number of media outlets including The Guardian,  Deezen, Architecture Today, BBC Radio London and Monocle

If you want to contact us for any reason you can do so at info@modernism-in-metroland.co.uk

You can also follow us on Twitter as @mod_in_metro, or on Tumblr as modernism-in-metroland.tumblr.com, and Instagram as mod_in_metro. We hope you enjoy discovering the great Modernist buildings of Metro-Land. You can also keep up to date with all our news by signing up to our newsletter HERE.

We now have two sister sites, Modernist London which features the buildings of Central and East London and also New Town Herts, focusing on the modernist buildings of the Hertfordshire Garden Cities and New Towns.