The interwar period was the golden age of Metro-Land. With the Great War over. a housing boom took place, looking to build Homes of Heroes and their families.
The rapid expansion of the sleepy villages of Middlesex that lay along side the new Metropolitan Railway, led the establishment of the what we now see as suburban North London. Homes, Factories, Schools, Shops, Churches, Tube Stations and much more were rapidly built to accommodate the new suburbanites. Architects such as Charles Holden, Owen Williams, Welch, Day and Lander and Curtis  and Burchett brought their own strains of modernism to the new settlements, and much of their work and other still survive in Metro-Land today. 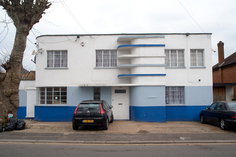