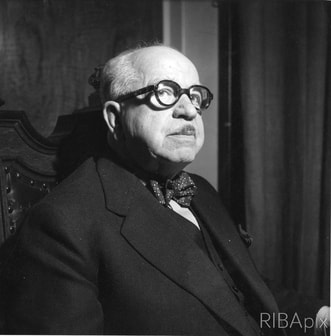 Despite the name, the output of Wallis, Gilbert and Partners derived very much from the efforts of Thomas Wallis. Indeed it has not even been fully established whether ‘Gilbert’ ever existed. There never actually being a partner of that name in the firm. Thomas Wallis was born in 1872 in West Norwood, and after studying architecture, worked for Sidney Smith, and then joined the Office of Works. He stayed there until 1916 when he set up in practice himself with the aim of designing and building factories in partnership with US firm Trussed Concrete Steel Ltd (Truscon).

The company produced a wave of factories, becoming more extravagant in design as the 20’s became the 30’s. The firm designed a string of factories along the Great West Road in Brentford, leading it to be dubbed the ‘Golden Mile’. These factories for Pyrene, Firestone, Coty and others cemented their reputation as the premier factory designers of the age. Their most famous single work, the Hoover Factory on Western Avenue in Perivale was built just after, and became a landmark for its jazzy, Egyptian influenced design. Despite Thomas Wallis being the company's driving force he was joined later on by a number of partners, including his son Douglas as well as architects JW MacGregor, Frank Cox and Sydney Elliott.

Wallis, Gilbert and Partners did not just churn out factories, they also designed a number of bus stations in the South East (Victoria station being one of the few surviving examples), as well as schools, garages, warehouses and even Abbey Road studios. After World War II, Thomas Wallis decided to retire, and the firm continued with Douglas in charge and Cox and Elliott setting up in business themselves, and taking much of the company’s staff and clients. Many of the buildings Wallis, Gilbert and Partners designed have been lost, but the ones that remain are often listed, allowing us to enjoy a slice of the art deco interwar years.